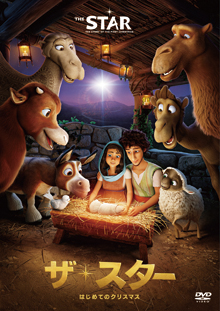 Home use DVD. A computer generated animated Christmas film from the viewpoint of animals. A small brave donkey and his animal friends become the unsung heroes of the first Christmas. The donkey is injured when he escapes from his tedious job of milling wheat and is taken in by Mary who names him Boaz or Bo. She and Joseph are celebrating their wedding. Joseph accepts Mary's miraculous pregnancy after trusting God. After Mary and Joseph leave for Bethlehem Bo learns about Herod's plot to kill the baby by encountering the assassin and his ferocious dogs. He tries to warn Mary and Joseph but they don't understand his braying. He and his friend Dave the Dove and a runaway sheep named Ruth go through many dangerous experiences before he and other animals can keep them safe and Jesus, the Son of God, is born. With lots of humor, music and famous people voicing the characters including wisecracking camels and eccentric stable animals. Animation is bold and colorful. English and Japanese. 86 minutes + extra features, including sing-a-long songs, how to keep Christmas all year long applying lessons to life, handcraft projects, cast, etc. From Affirm Films, SONY's faith-based division.