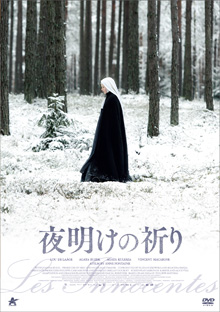 French movie (Les Innocentes). Luminescent, unflinchingly honest and respectful of religion, director Anne Fontaine's 2016 drama about a fictional Benedictine convent in post- World War II Poland gently explores the conflicts between duty to the living and the shattered faith that can result from acts of depravity. The screenplay is loosely based on the real-life exploits of Madeleine Pauliac, an atheist French Red Cross doctor, renamed Mathilde, who is helping survivors of death camps and wounded French soldiers. After delivering the baby of a young nun, the physician is told the horrible story: Several months earlier, invading Soviet soldiers, believing it to be their right, raped the sisters, leaving at least seven of them pregnant, and the abbess infected with syphilis. The film explores how believers respond to awful times with faith and doubt with well-developed characters. The final scene shows the nuns have moved from their isolation to now running an orphanage that cares for the babies and the street children. But this is obviously a solidly adult picture, and not for those in search of casual fare. Mature themes. Rated PG-13 or A-14. In French with Japanese subtitles. 111 minutes.